On Tuesday 13 December, we were treated to a night of festive music and literature at Mr Robson’s Advent concert. It was extra special to be able to perform again to an audience rather than a live streaming event which we have to do for the last couple of years. Mr Robson’s eclectic selection of Baroque era symphonies, sonatas, concerti and choral pieces performed expertly, interweaved with some fantastic readings from staff, created a fantastic atmosphere and a lovely evening for all involved. Some of the most notable pieces of the night were the wonderful rendition of Boyce’s symphony in F major - played by Hui-Quing Liew, Cormac Boden, Sophie Lavenby, Declan Boden, Fin Engelberts, Dr. Parsons and accompanied by Mr Robson - Quantz’ Trio Sonata in C major, First Movement, a lovely flute duet (Ruby Sharma, Imogen Downes and continuo), ‘Arisio’, by Fiocco, impressively performed by Fin Engelberts. After some conversation over mulled wine and mince pies in the interval, we heard some fantastic solos from Hui-Quing Liew and Sophie Lazenby on strings, and a very impressive soprano solo of ‘Sweet was the song the Virgin sung’, performed by Eliska Hodkova.The small choir and audience then joined together to sing ‘While Shepherds Watch’ altogether, a bookend to a lovely night, which we can only hope to see return next year! 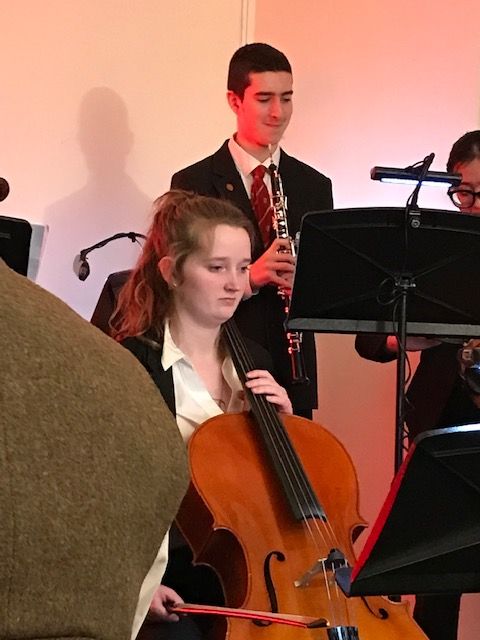